Posted on January 6, 2013 by westcarrollchamber 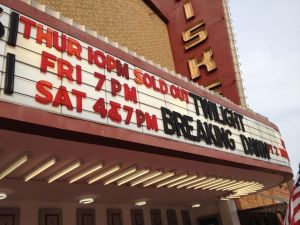 Holland Entertainment LLC, operators of the Fiske Theatre in Oak Grove, have announced movie attendance in 2012 increased by 17.5% over 2011 posting its largest attendance numbers since the theatre returned to operation in 2009 with 16,967 movie goers this past year.

“2012 started slow and scary,” Adam Holland, President of Holland Entertainment said. “Only 3,288 people came to the movies from January – March last year which was our lowest attendance since we have been back, but things seemed to turn around in March and stayed hot posting quarterly increases in the second and fourth quarters of the year.”

The slow start of 2012 can be attributed to the lack luster performance of the box office nationally for the final quarter of 2011 when Hollywood flooded the market with what many called less than average movie going product.  The Fiske, who generally gets movies three to four weeks after the national release date carried those products over to the new year.

The increase locally follows the national trend where attendance was up 6% nationwide in 2012 with 1.36 billion people going to the movies compared to 1.29 billion which was the lowest movie going attendance since 1994 breaking two years of declines in movie attendance.

“The slow start had us on pins and needles,” Holland said. “After being forced by the industry to make a sizeable investment in digital technology to start the year as slow as we did caused some major concerns, but when the blockbusters began to roll in mid spring we saw the people of West Carroll still saw us as a valuable part to their quality of life.”

Much of the increase in attendance can be attributed to the solid product Hollywood put out in 2012 with such films as Breaking Dawn Pt. 2, The Avengers, Dark Knight, Hunger Games, The Amazing Spiderman and the sleeper hit, The Odd Life of Timothy Green, all of which performed better than expected at the box office.

“Movie going is a tradition in America,” Holland said. “Yes home technology has improved and release windows are getting shorter, but you cannot get at home what we offer at the cinema and that is Big Screens, Big Sound and most importantly that escape from reality and the communal movie going experience.  That is why movie going    has been and always will be the American people’s first choice for away from the home entertainment.”

The Fiske also debuted its newly renovated auditorium thanks to the overwhelming support of the people of Northeast Louisiana with the Chamber’s Operation 2012 Fundraiser and Project which gave the theatre her biggest facelift since she opened in April of 1950.

Holland is very optimistic about 2013 as Hollywood seems to have gotten the picture after the dismal to 2011 and the product seems to be strong in the coming year.

“We look to start 2013 strong with big award winning hits like LINCOLN, THE HOBBIT, and LES MISERABLES,” Holland said.  “Things look like they will fade some mid-spring but the summer and fall look hot with the new SUPER MAN “MAN OF STEEL,” LONE RANGER and many more.”

The Fiske Theatre is Northeast Louisiana’s oldest operating and last single screen movie theatre.  The Fiske is owned by the West Carroll Chamber of Commerce and operated by Holland Entertainment LLC of Oak Grove, La.

This entry was posted in Uncategorized. Bookmark the permalink.